One day, i might get one of these too!

A few months ago, Konstantin Kovshenin pinged me and asked if I want to come over to Moscow for a WordCamp. Without thinking too much, i have agreed. Unfortunately, that had some consequences – i had to give a speech in a WordCamp.

Well, but i still agreed on it!

As always, i had delayed to create the presentation up to the last week. If not for the few  pings from Konstantin, I’d probably delay it until the last minute.

I’ve got to Moscow on Friday morning, and spent most of the day working from the hotel and Starbucks. Then, in the evening, we had a pre-WordCamp meetup with all the volunteers / speakers. The meetup was in some lovely caffe called ‘Chocolate‘ and you could see a part of the Red Square from it. I’ve met all those nice and smart people! Everyone looked so brave, but i knew that deep inside they were also as afraid of the next day as i was 🙂

Next day i’ve got to the Digital October lounge around 8am to help out with anything that’s needed, but it looked like almost everything was planned and ready. People started gathering 15 minutes before the registration, which was at 9am. There was around 150 people in total, which isn’t that much for Moscow, but it’s quite a lot for a first WordCamp.

Konstantin was leading the first part of the WordCamp, and Nikolay Mironov was leading the second part. They had some nice idea of presenting the speakers in some funny way – although the funny part was usually truth.

First speaker, the bravest woman of them all, was Olga (Ольга Горяева) with her presentation about using WordPress for everything else rather than just a blog – news sites, portfolio websites, internet shops, radio/music streaming websites, twitter analytics and etc. Of course i knew this, but it was a really good presentation for all those users who still think that WordPress is only for blogs. Double points for being the first speaker!

Second speaker – Nikolay Mironov – was talking about portfolio websites and freelancing. Lots of freelancers don’t have a portfolio website, and it’s not that hard to make one (pretty easy actually). Also, he gave lots of hints on how to be a good freelancer, where to search for clients, how to make the clients stay and etc. The way he did the speech was very attractive – he was very dynamical / active.

I missed the third speech as i was getting caffeinated and nicotinated before the next speaker … me! But from the number of questions after the presentation i understand that it was very interesting, especially to some people interested in the topic.

So, my presentation probably didn’t go very well, but well, there’s always a first time for everything, and it’s usually not ideal on the first time 🙂

My presentation took only about 20 minutes (whereas usually other speakers spoke for about half an hour) and then i had a number of questions. I was very nervous so i probably gave some false answers to one or two questions (i.e. the hdd brand we use the most). Also, some of my answers were short and i could have given more information about the answer.

My presentation was the last one before the lunch break. We had some subway sandwiches ready for us (separate sandwiches for the vegetarians). I was very hungry, nom nom 🙂

The next one was Konstantin and he gave a presentation about increasing the performance of your WordPress website. It was probably the most interesting presentation for me, as a sysadmin. He told about some interesting situation where he had to create some custom tables with MySQL on insert/update triggers to better use the indexes on the fields he needed. If i did this presentation, i would probably have missed some parts he talked about.

After that, we had some after party in the local bar called “Progress Bar”. For some reason, most of the people went home, and didn’t want to spend their Saturday evening having a chat with geeks. By the way, if you ever go to Progress Bar – don’t forget to look down when you go to the bathroom, it has some interesting view out there 🙂 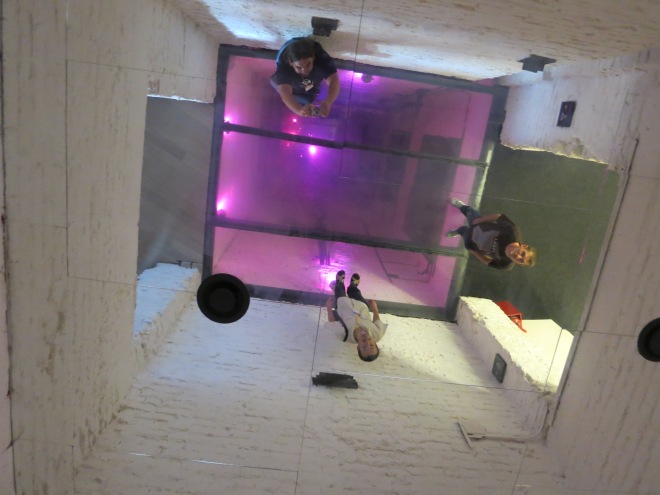 Overall, the WordCamp was great, i met a lot of interesting people, the presentations were also interesting. If you’ve got a WordCamp anywhere around your city – please go, you’ll really like it!